Day 2 saw the students get a crash course in thermodynamics then a visit to the Science Museum followed by space in 2050 by Tony Mears from the UK Space Agency. 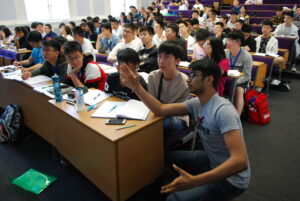 There are currently 11 scholarships available to UK and EU students to attend the Global Space Design Challenge.   One full scholarship includes full board and room at Imperial College London and ten supplemental scholarships of £1,000.00 applied toward the programme fee. 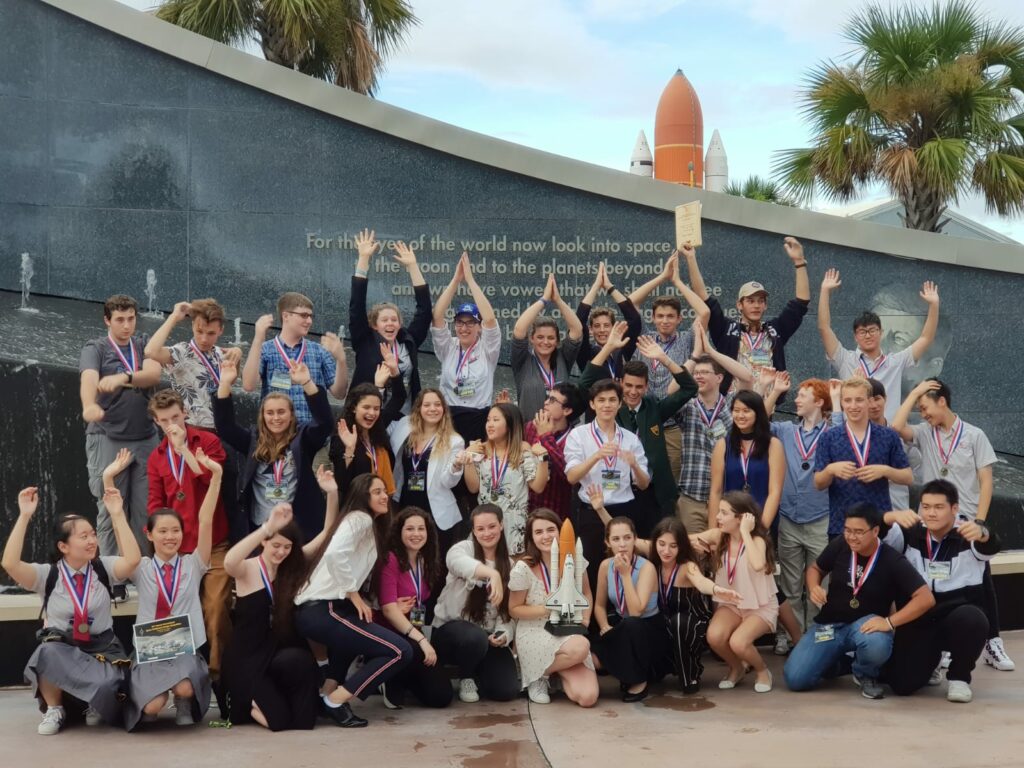 This intensive residential summer programme for the highest achieving students throughout the world, is held at Imperial College London in the Department of Earth Science and Engineering, and offers students the chance to learn from staff who are experts in their field from both industry and academia.

This 12 day experience is a unique and exciting science, business, medical, computer, design and engineering programme, culminating in a two day challenge based on the UK Space Design Competition. The programme provides opportunities to participate with students from the UK and around the world. The challenge is designed as a simulation of life in industry. A futuristic company called the ‘Foundation Society’ distributes a ‘Press Release’ followed by a detailed ‘Request for Proposal’.

Twelve students from the winning company will have the opportunity to attend the next years International Space Design Competition at Kennedy Space Center, Florida including NASA tours.

As part of the programme students will also visit Oxford and Cambridge Universities, where they will have the opportunity to meet with admissions directors who will provide answers about the admission process to these top Universities, and guide students on how to present themselves in the best possible light.  Yasmin Sarwar, Dr Elizabeth Day, and  Natalie Lancer will run unique Masterclasses.

Students will also experience an interactive presentation which will provide opportunities for them to practice answering interview questions and to begin developing their strategy for communicating their strengths to others. 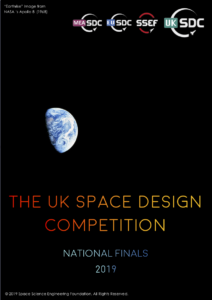 How We Think and Learn

How We Think And Learn

Every great advance in science has issued from a new audacity of imagination.

Most people assume that learning results from teachers transmitting knowledge: clearly explaining concepts, procedures to be practiced, and facts to be memorized; then testing to assess retention and application, with subsequent feedback. Yet this could not be further from the truth… Continue to read Chapter 22

Why do the competitions work?

We are often asked why the Space Design Competition (SDC) format works. Whilst my quick fire response when in the throes of organising an event is often, “It’s all the students’ own work, not ours”; this does belie the research and development that underpins the setting up and running of the events run by the SSEF.

Whether taking place in our competition for younger students, (the Galactic Challenge (GC) has been tailored for 10 -14 year olds), or the hallmark senior competition, the Space Design Competition for those up to the ages 15 – 18, students’ become enthused by the event, and surpass expectations of their teachers and parents. The SDC and GC presentparticipants with a problem that is challenging enough so that they need to apply (metacognitive) strategies to monitor and achieve success, but not so challenging that they become overwhelmed. The provision of mentors that facilitate students to recognise problems and thus achieve solutions is key to SDC and GC methodology. Mentors will encourage planning and monitor the progress throughout the day, but will not give specific answers; rather they will facilitate the students to solve their own questions. In addition to the confidence students acquire from taking part in a competition, they gain soft skills from working in a large team, and self-belief from presenting their completed work, and answering questions from a panel of expert judges. Further development of all these acquired skills beyond the competition is a given.

Many of the underlying principles that have been introduced to SSEF competitions come from work and research I have completed with Catherine Twomey Fosnot. The following edited excerpt is from the introduction of a chapter we co-wrote in 2005.

Excerpt from Chapter 2 Constructivism: A Psychological Theory of Learning by Catherine Twomey Fosnot and Randall Stewart Perry – you can click on the link above to read the chapter in its entirety*

Psychology – the way learning is defined, studied, and understood—underlies much of the curricular and instructional decision-making that occurs in education… Behaviorism is the doctrine that regards psychology as a scientific study of behavior and explains learning as a system of behavioral responses to physical stimuli. Psychologists working within this theory of learning are interested in the effect of reinforcement, practice, and external motivation on a network of associations and learned behaviors. Educators using such a behaviorist framework preplan a curriculum by breaking a content area (usually seen as a finite body of predetermined knowledge) into assumed component parts—“skills”—and then sequencing these parts into a hierarchy ranging from simple to more complex. Assumptions are made that observation, listening to explanations from teachers who communicate clearly, or engaging in experiences, activities, or practice sessions with feedback will result in learning; and, that proficient skills will quantify to produce the whole, or more encompassing concept… Further, learners are viewed as passive, in need of external motivation, and affected by reinforcement; thus, educators spend their time developing a sequenced, well structured curriculum and determining how they will assess, motivate, reinforce, and evaluate the learner. The learner is simply tested to see where he/she falls on the curriculum continuum and then expected to progress in a linear, quantitative fashion as long as clear communication and appropriate motivation, practice, and reinforcement are provided. Progress by learners is assessed by measuring observable outcomes—behaviors on predetermined tasks. The mastery learning model  is a case in point. This model makes the assumption that wholes can be broken into parts, that skills can be broken into sub skills, and that these skills can be sequenced in a “learning line.” Learners are diagnosed in terms of deficiencies, called “needs,” then taught until “mastery”—defined as behavioral competence—is achieved at each of the sequenced levels. Further, it is assumed that if mastery is achieved at each level then the more general concept (defined by the accumulation of the skills) has also been taught. It is important to note the use of the term “skill” here as the outcome of learning and the goal of teaching. The term itself is derived from the notion of behavioral competence. Although few schools today use the mastery learning model rigidly, much of the prevalent traditional educational practice still in place stems from this behaviorist psychology. Behaviorist theory may have implications for changing behavior, but it offers little in the way of explaining cognitive change—a structural change in understanding. Maturationism is a theory that describes conceptual knowledge as dependent on the developmental stage of the learner, which in turn is the result of a natural unfolding of innate biological programming. From this perspective learners are viewed as active meaning-makers, interpreting experience with cognitive structures that are the result of maturation; thus, age norms for these cognitive maturations are important as predictors of behavior… Further, the curriculum is analyzed for its cognitive requirements on learners, and then matched to the learner’s stage of development…
Rather than behaviors or skills as the goal of instruction, cognitive development and deep understanding are the foci; rather than stages being the result of maturation, they are understood as constructions of active learner reorganization. Rather than viewing learning as a linear process, it is understood to be complex and fundamentally non-linear in nature.
Constructivism, as a psychological theory, stems from the burgeoning field of cognitive science, particularly the later work of Jean Piaget just prior to his death in 1980, the socio-historical work of Lev Vygotsky…The remainder of this chapter will present a description of the work of these scientists and then a synthesis will be developed to describe and define constructivism as a psychological theory of evolution and develop.

UK Space Agency and the UKSDC

Chapter 20 of the UKSDC book which is available on Amazon.

The first of these presents an opportunity to use space for education and the second is a problem that can be addressed by using education for space.

These two equally important aspects are intimately related since harnessing space to improve the take-up of STEM subjects for the benefit of the United Kingdom (UK) economy will have corresponding benefits for the space sector by increasing the potential pool of graduates and technicians.

The UK Space Agency helps sponsor the UK Space Design Competition (SDC) as it provides an environment that addresses both goals. It gives participants the chance to experience being in a simulated engineering company and excites them about space sciences and engineering.

Continue to read the full chapter

It was great to join all the students this weekend who took part in the UK Space Design Competition finals for 2018. This year the students were transported forward to the year 2038 where they were tasked with designing Bellevistat, a space settlement in orbit around the Earth-Moon L4 libration point.

The challenge conjured up for me images of the rotating wheel space station from Stanley Kubrick’s movie 2001 A Space Odyssey. I must admit that I have always been a sucker for space movies. I love the moment in Apollo 13 where Tom Hanks is scribbling mathematical equations on a scrap of paper in an attempt to calculate their way out of immanent death as they plunge back to Earth. Or Matt Damon applying his biological skills to survive on Mars in the film Martian. Or Anne Hathaway and crew using Einstein’s theory of general relativity to work out how many years on Earth they were about to lose as they entered a huge gravitational field in Interstellar.

So I could recognise the buzz of excitement that students this weekend felt as they got the chance to be involved in their very own space story, designing the set and using their mathematical and scientific skills to solve tricky problems that arise during their own adventure. Of course as we go forward, adventures in science fiction are increasingly becoming the next ideas for science fact. The designs that the students have been coming up with over the weekend could well be the ingredients for a future reality of a settlement on Mars or the Moon or orbiting the Earth.

One of the things I love about the competition is seeing the combination of skills that the students bring to the competition. It is one of the tragedies of our education system that we treat subjects in isolation. You go from the maths lesson to geography to art never realising the huge connections across the curriculum. The competition really fights this silo mentality requiring students to bring their scientific and mathematical expertise to bear (they need to know what a libration point is) but combining that with an artistic flair to design their settlement, a business acumen to cost the whole project and finally bringing their presentational and theatrical talents to present the project to the judges. The competition builds bridges across all these aspects of the education system.

The students set out on Saturday morning on an amazing journey of discovery and exploration. Although they come back to Earth on Sunday afternoon, I am sure the competition will be the launch pad for a life-time’s journey exploring science, the arts and the universe.